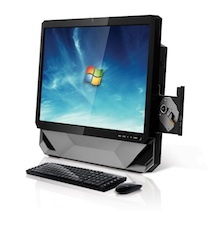 Advan local vendors, try to offer new products that anti-mainstream of what is on the market, namely desktop computers with additional TV Turner.

Is Deskbook, an All in One PC which is the latest product from Advan. This desktop has a variety of advantages, some of which are Energy Saving, Upgradable, Silent, Space Saving & Heavy Duty, Adjustable Display Stands and TV Tune

Energy Saving Advan Deskbook owned technology called “Nano Power Supply” is the development of hardware technology with a smaller scale to supply electricity to all parts of the electrical current and the set is only 65% or just use the electricity consumption of 65 watts.

END_OF_DOCUMENT_TOKEN_TO_BE_REPLACED

Yahoo and Google are usually less friendly because it often involved business competition. But this time, Yahoo tried to succumb to launch an Android phone, which incidentally is Google’s operating system.

Yahoo! Phone, thus its name, made ??by a Japanese manufacturer, Sharp. This phone is only sold in the country devoted to the Sakura. In collaboration with SoftBank operator, the handset is planned to be marketed from next month.

Reported TechTree and quoted on Monday (8/22/2011), there are also features a TV Tuner in Yahoo Phone. Rather watch TV via mobile phone facility is quite popular in Sakura’s.

Then why is called Yahoo! Phone? Apparently in which an application range of Yahoo services. So the user can access it easily in mobile.