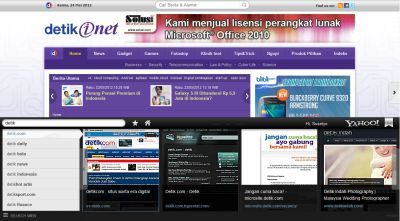 Yahoo introduced a new product called Yahoo Axis. This service is a combination of search engines with a browser.

Certainty is obtained after a number of media crews in Uncle Sam’s inaugural event received an invitation Yahoo Axis. From the email was revealed, Yahoo claims this service as a new virtual world explorer tool.

Excerpted from The Next Web, Thursday (24/05/2012), there are at least three excellent features offered by Yahoo Axis. That is fast, smart design with a rich, connected experience and personal Home Page. END_OF_DOCUMENT_TOKEN_TO_BE_REPLACED

Are you already fed up with activities in the real world? maybe the question is rather silly, but it is. many colleagues in my office who also felt saturated with activity every day, like prepare breakfast, then went to the office, undergoing routine menjenukan office, meeting clients, and many other things. if you feel the things that I mentioned earlier, you are not alone, you have the same feelings with thousands, even millions of people around the world feel the same, saturated. END_OF_DOCUMENT_TOKEN_TO_BE_REPLACED

What’s wrong with the web? This morning a lot of Twitter users ‘chatter’ as their favorite Twitter client was an error.

Saturday (02/19/2011), at about 8 am, the timeline twitter client is looking not update. In addition, users also can not do tweet.

“error posting your tweet. Forbidden!”, write the message posted on the BlackBerry display.

“That was already sick of the uber Malem, er instead now has left this virtual world, dadaaahh uber twitter,” added another tweeps with your @ PulungAnggi. Some other users are now much BlacBerry mutual suggest to move to another twitter client. What really happened?

Important events concerning the life of a celebrity did not escape the attention of the surfers in cyberspace. Various comments and responses, was soon flooded the Internet when a natural event that pushed them to the surface. END_OF_DOCUMENT_TOKEN_TO_BE_REPLACED